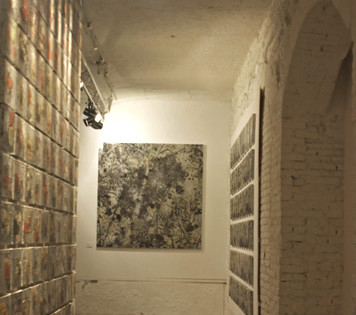 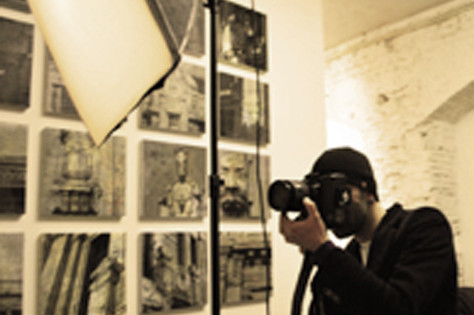 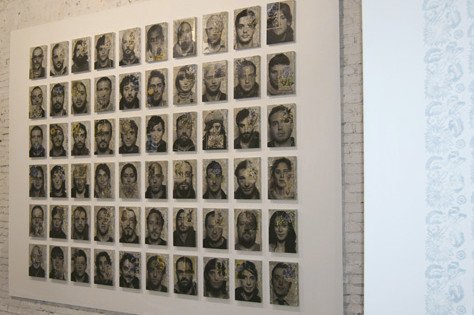 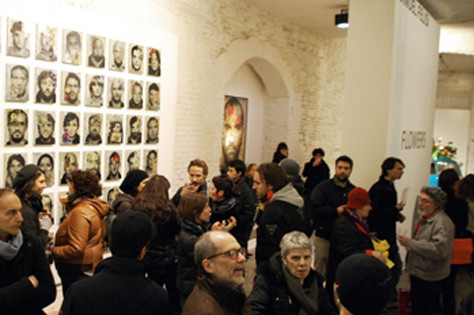 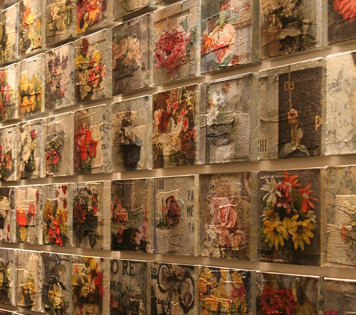 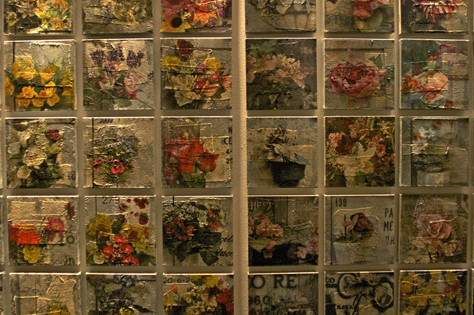 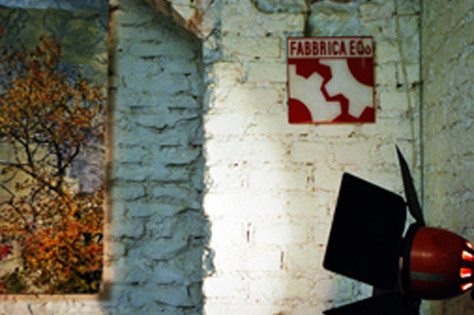 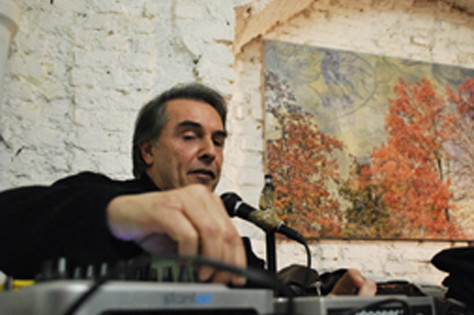 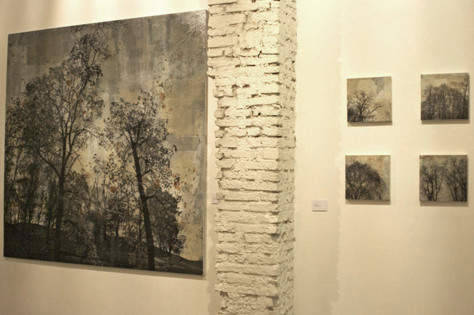 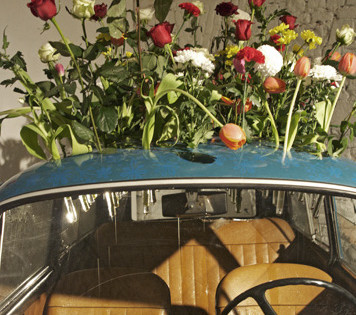 Life and death merge into one and there is
neither evolution nor destiny, just being.
(Albert Einstein)

Manuel Felisi study is, with no doubt, the result of the Copernican Revolution identified in Gerhard Richter's Art, the german artist whom, possibly in the most original way, has pondered over the ephemeral boundary between pictorial and photographic image, through reality and representation. Gerhard Richter work, along with other artists' like Chuck Close and Malcolm Morley, has represented, according to Wolfgang Becker, a sort of training for the “digital eye”. The mutated way of seeing and conceiving pictorial images through photographic “filter”, television and computer screen, has predisposed our visual perception to the introduction of images made of bits. In the Painting field, it means that an hybridization has taken place, at least at a syntactic level, between manual practices and new digital methodologies. In line with Nicholas Negroponte, Ex-Director of MIT in Boston and author of popular bestseller “Being Digital”, the change concerns a switch, in the field of informations, from atoms to bits, which is the migration from the material object to the immaterial one.
In Manuel Felisi's case, takes place a happy compromise between the insuppressible necessity of a traditional paint work and new possibilities given by digital tecniques of processing and printing images.
The milanese artist describes his work like a “level painting”, built with various stratifications made out of an analogical contribution, on which a final marking of digital-photographic nature is set upon.
The operative control of his objects, at least those with a bidimensional nature, therefore is constitued by an unstable halfway zone, but in the same time, is a potential melting pot for painting, decoration, photography and digitalism. The artist works build up throughout a multiple operation sequence, as decorative painting, the overlap of wallpapers and gauzes, the contribution of pictorial elements and sign language. On this tangible ground, atomic, as Negroponte would say, Felisi impresses the photographic sign, conveniently shifted in bits, in other words a package of absolutely immaterial informations. The print of this images, therefore, becomes a stamp, a mark, with which is ratified the digital photography definitive invasion in the traditional painting field. Son of the Liquid modernity described by sociologist Zygmunt Bauman, Felisi moves indifferently through medias and different tecniques, sewing up a sort of suture between various research fields. What is really interesting of this liquid attitude, is the absence of ideological opinions, the absolute oblivion towards gerarchic and orthodox systems of each discipline. Personally, I find annoying and unacceptable the intransigence connected to the employment of techinques and instruments. Pure painting, the digital sublime are extremes which modern-liquid society doesn't have time to ratify. While custumes, habits and culture evolve with uncommon rapidity, artists capable of using hybrid forms of expression get ready to become the best interpreter of their own age. This adaptability is a structural element of Felisi's work, whom, as a modern surfer, moves himself, sliding with rare easiness, from the static dimension of the painted or photographed frame, to the tridimensional and dynamic form that belongs to installation works, often conceived as the construction of a developing microcosm.

In the iconographic imaginary of the artist, flowers are recurring elements, either dealing with stylized shapes of ornamental character - as an example those whose are impressed with the use of stencils or printed on wallpapers – or with photographic images that give to the work a whole fragile and graceful mark.
In each circumstance, flowers get, for Manuel Felisi, different significance depending their collocation and their relationship with other images inside the work.
The new Manuel Felisi project, symptomatically titled as Flowers, revolves around this polarity and conjuction of opposite elements. Beauty and transience, resplendence and obfuscation, light and shade fleetingly alternate through Felisi's work, where trail and memory get the shape of fade, allusion, sometimes of sweet and loving warning.

“A cynic”, as the american art hystorian Russel Lynes wrote, “is someone whom, when smells flowers, looks around for the coffin”. Manuel Felisi does exactly the opposite, recalls wholeness of life, starting from its relics, footprints and trails that time relentlessly erases. His faces, landscapes, objects battered by rain witness the strenuous obstinacy of life and nature against adveristy. The artist uses the memory, the trace, the out-dated object to display the perpetual movement of existence, which imprints, sometimes, even onto the marble surfaces of funerary momuments, to the indelible effigies of the deceased, on stamps, on the skeletons of old automobiles which, like flowers, suggest a sense of transitory, fleeting beauty.

The small canvases with the image of a flower outlined on the background of a granite gravestone, are the epitome of deciduous grace. Is not the triumph of death, which Manuel Felisi intends to celebrate with this works, rather the persistence of nature in all its forms. The photographs, taken in two different milanese graveyards, the nobile Monumentale and the suburbian cemetery of Lambrate, introduce a leap, a variant in the way to interpret and live the visual symbology of flowers. Shots taken at Monumentale have a decadent, melancholic appearance. Flowers, as gravestones, seem to suffer from the weathering action of time. Those from the hystorical burial ground are, in fact, places of forgetfulness, more than memories. Compared to these ones, those of the Lambrate cemetery seem blessed places, sanctified by a sudden flowering. Gravestones are clean, looked after carefully. In them, a sign of recent affection, of a living love, can be read. The dear departed result more vivid, like flowers on tombstones. We, as living ones, are their children. Flower children, somehow.
Like portraits of men and women, which the artist associates for assonance, transitory flowers effigies. Transitory in a literal way, since they have been printed on stamps, which, again, have been impressed on the faces of hypothetical travellers, whom are ephemeral for definition.

With or without the human attention, flowers, plants, trees reform life in any condition. This is, perhaps, the sense of Giardinetta, an installation in which the artist reclaims an old Bianchina automobile, tranforming it in a germinator of new life, created through a favourable microclimate. The car has an obsolete and abandoned aspect, the blue enameled coachwork is marked with a floral texture, tone on tone. The rooftop becomes a hanging plant rack with thin cruets, destined to host cut flower stems. It rains, instead, inside the compartment, sort of underworld, of intersticial universe, where bacteria and mouldy multicellular organisms proliferate. Giardinetta is the story of the invincible force of life, which gets the upper hand even in a hulk of the industrial age, that in Felisi's hands becomes a little terraforming experiment.

Flowers, we said, are the fil rouge of the artist body work and in particular of the series of unnamed portraits marked by the most multicolored floral stamping. Here, stamps with flowers coming from all over the world become an extension of the portrayed personalities, symbolic attributes that aim at rebuild the language of florigrafia (the language of flowers) very popular in the nineteenth century or that kind of emotional grammar know by japanese with the name Hanakotoba, which attributed a particular meaning to each flower. The artist succeeds with infusing in these faces, emerged from a supposed past, what the Philosopher Henri Bergson called élan vital, thanks to the variety of floral species and to a rich chromatic palette, which approaches pictorial pigments to the rigour of photographic black and white. Like the artist declares, “I adore colors, for this reason my canvases are full of red blots, of yellow marks, of brown drippings, passages of old paint rollers with floral decorations, fabrics with flowers, colorful wallpapers, glued amber gauzes that stratify on painting”.
The élan vital crosses every aspect of the artist research. It can be perceived on canvases, above all in the organic scent that precedes the digital imprinting, in that tick and dense material that Felisi, patiently, smooths out, layer after layer, as for building solid foundations on which to lay down the ethereal patina of photographic prints. And the same could be said about the installation works, built as if they were pulsing microcosms, which include time, growth, corruption and finally trasformation of all things. Whose life is made.